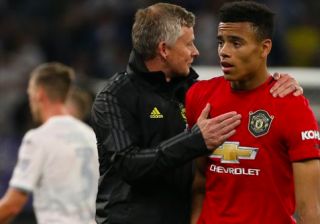 Mason Greenwood has been putting in extra work at training to improve his finishing ability.

The 17-year-old scored United’s only goal against Rochdale at Old Trafford last night, as Ole Gunnar Solskjaer’s side scraped through on penalties.

Greenwood has now scored two goals in as many matches at Old Trafford after netting United’s only goal against FC Astana in the Europa League group stages.

And according to the Sun, Greenwood has been wowing Solskjaer and coaching staff with his efforts in training sessions.

Their report claims the youngster is one of the first to arrive for training every morning, and stays an extra 20 minutes in order to work on his finishing technique.

Solskjaer has already described Greenwood as the most natural finisher at the club, and it’s great to see him motivated to put in the extra hours to improve and impress the manager.

Greenwood is one of the most talented graduates to come out of the academy and it looks like he has the right attitude to be a United star for years to come.

Injuries to Marcus Rashford and Anthony Martial mean Solskjaer now must select Greenwood, his biggest attacking threat, in the home game against Arsenal on Monday night.