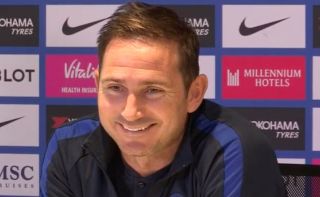 It’s not getting any easier for Ole Gunnar Solskjaer at Manchester United.

After scraping through by the skin of their teeth against League One Rochdale last night at Old Trafford, the Reds have been drawn away to Chelsea in the next round of the Carabao Cup.

United had to rely on their ability from 12 yards to see them through to the next round, whereas Chelsea put their lower league opposition in Grimsby to the sword with a 7-1 demolition at Stamford Bridge.

The Reds should have also put their tie to bed comfortably, but were yet again not clinical in front of goal and Mason Greenwood’s performance was the only positive to take.

Greenwood’s importance to Solskjaer has been amplified further through the injury to Marcus Rashford and the youngster has to start against Arsenal on Monday night.

Chelsea boss Frank Lampard was told by a reporter the news of the home tie against the Reds, and you can see his live reaction below: