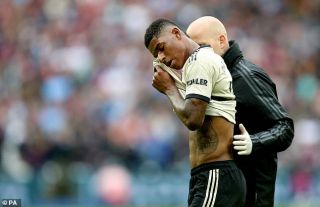 Ole Gunnar Solskjaer has provided an injury update on three of his players ahead of the Premier League encounter with Arsenal on Monday night.

This is a blow for Solskjaer considering how light United are in attack, again pretty evident against the League One side last night.

“They haven’t trained the last couple days, unfortunately,” Solskjaer said, as per football.london. “Hopefully they can be back for Alkmaar next week, that is what we’re hoping.”

Rashford will be out for longer with a groin injury sustained in the 2-0 defeat against West Ham last weekend. They’re currently looking at the next international break for his return date.

“He is recovering,” the boss added. “He is not very, very bad so we hope to see him before the international break.”

Mason Greenwood recovered from illness and returned last night, scoring the only United goal in normal time, so unless Anthony Martial is back it will be the 17-year-old who leads the line against the Gunners.

Arsenal travel to Old Trafford on Monday, with Solskjaer’s men looking to get back to winning ways in the league after losing to West Ham.