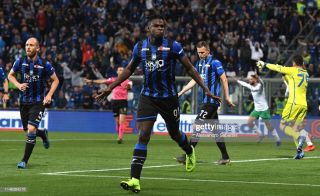 Ole Gunnar Solskjaer needs to sign a striker in January or next summer due to the problems United are having this season in front of goal.

After selling Romelu Lukaku and sending Alexis Sanchez out on loan, Solskjaer only really has Marcus Rashford and Anthony Martial to select from. Neither striker has finished a season with 20+ goals to date and Mason Greenwood is still very much edging his way into the team.

Zapata, 28, joined La Dea on loan from Sampdoria last summer and has so far amassed 32 goals and nine assists in 52 appearances across all competitions.

Last season he played a key role in Atalanta finishing third in Serie A which saw the club qualify for the Champions League for the first time in their history.

He scored 23 league goals and that says he has the ability to be relied upon, though it’s a matter of whether he can adjust his game to the Premier League.

Zapata netted 28 times in total throughout 2018/19 and has begun this season strongly, scouring four goals and providing an assist in six matches so far.

Calciomercato claim United are interested in signing Zapata who is valued at €40m according to Transfermarkt. However, if he has another strong season in Serie A we can expect that valuation to rise because that should increase demand from other clubs across Europe.

Atalanta will be eager to sign Zapata on a permanent basis once his loan spell ends, but United have the financial power to turn his head.

And, we’re obviously a club of higher prestige.