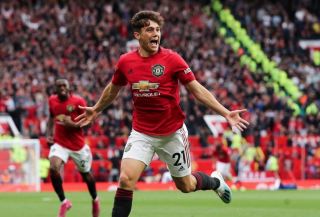 Manchester United face Arsenal on Monday in what promises to be a fascinating clash at Old Trafford.

An interesting debate always discussed amongst supporters is how many players from one side will get into another, so we had a go at combining the best eleven between the two teams.

The players selected below are all currently fit and available for the clash on Monday night.

Despite, some indifferent performances in recent months, the Spaniard is still one of the best goalkeepers in the world and is comfortably ahead of Bernt Leno in this selection.

Wan-Bissaka has settled into life brilliantly at Old Trafford since his summer move from Crystal Palace, and is arguably the best defensive full-back in the Premier League.

The England international is the most established centre-back between the two clubs, and is the dominant presence in United’s back four.

Tierney made his first appearance for Arsenal in the thrashing of Nottingham Forest on Tuesday night and is picked ahead of Luke Shaw because of his superior attacking ability on the overlap.

The Frenchman is the only United player that can seriously be considered to make it into this midfield. The centre of the park is Solskjaer’s weakest area but Pogba is the only player with serious quality that has the ability to change a game with a moment of brilliance.

Guendouzi was recently named on a 40-man shortlist for the Golden Boy award for 2019 and deservedly earned his first France call-up this season. The youngster’s distribution has improved greatly since he first broke into Unai Emery’s first-team setup, and edges Scott McTominay in the holding midfield position.

The Spaniard already has two assists in four Premier League appearances, and is the kind of player that keeps things ticking over in midfield. On-loan from Real Madrid, Ceballos also has the quality to unlock opposition defences when playing in an advanced role.

Pepe is a huge talent who is adjusting to life in the Premier League. He is the only specialist right-winger between the two clubs and would have been welcomed at Old Trafford this summer.

Aubameyang is the kind of player United are crying out for in attack. The Gabonese international was joint Golden Boot winner in the Premier League last season and is a proven goalscorer which the Reds are lacking after failing to replace Romelu Lukaku.

When the Reds signed James he was supposed to be a talent developing for the future. However, he has broken onto the scene exceptionally and is a dangerous proposition for any full-back running down the left-flank.