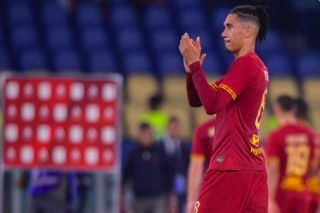 Chris Smalling made his Roma debut in last night’s 2-0 defeat to Atalanta at the Stadio Olimpico.

The on-loan defender’s debut in the Serie A has been delayed because of muscle problems, which have ruled him out of action in recent games.

Smalling looked assured early on alongside former Tottenham defender Fernando Fazio at the back.

However, Roma eventually succumbed to Atalanta when Colombian striker Duvan Zapata fired home past Smalling and into the roof of the net.

Zapata, 28, has been linked with a move to Manchester United and Calciomercato have reported that the Reds are interested in signing him.

It’s not a great start to Smalling’s season-long loan spell in Rome, but we hope the Englishman can have an impressive season in Italy.

Meanwhile, Axel Tuanzebe, who has replaced Smalling as third choice centre-back at Old Trafford, wore the captain’s armband as the Reds went through on penalties against Rochdale on penalties last night.

Not the result we were hoping for but a great feeling to get on the pitch wearing the shirt. Focus now shifts to Sunday. pic.twitter.com/fWsK6DEstM