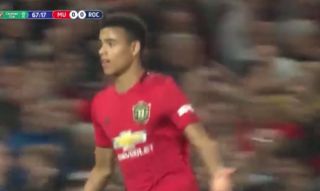 Mason Greenwood has put Manchester United into the lead against Rochdale in the Carabao Cup.

The 17-year-old gave United the breakthrough 68 minutes in with a stunning left-footed strike.

It’s been a snore-fest for anyone watching that supports the Red Devils, but it won’t surprise anyone that Greenwood is the one to drag United out of the mud.

Prior to the goal, Aaron Wan-Bissaka made an important clearance off the line to stop Rochdale getting ahead.

With under 20 minutes remaining on the clock, United need to hold onto their lead and should go looking for a second!