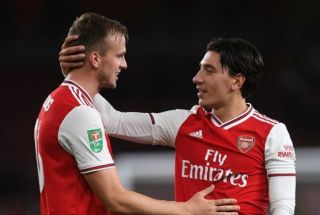 The Spaniard was sidelined for several months due to an injury he sustained in January, although he returned on Tuesday night as Arsenal won their Carabao Cup third round tie against Nottingham Forest.

Bellerin came on as a substitute for new signing Kieran Tierney and assisted Joe Willock’s goal which was Arsenal’s third of the match.

The North London club booked their place in the fourth round by thrashing Forest 5-0 thanks to a brace from Gabriel Martinelli and goals from Rob Holding, Willock and Reiss Nelson.

Emery was far from certain when asked about Bellerin’s availability for Monday’s encounter with United at Old Trafford, saying (as per Goal.com): “He wanted to play 90. He said I’m ready and wanted to play. I think no [he won’t be ready to start against United]. Maybe in his mind yes. We need to listen to the doctor. The first minutes were amazing for him… The most important for him is his attitude. He wants to help us.”

Bellerin was a regular for Arsenal before getting injured. You could even go as far as saying the Spaniard was a key player at the club, with blistering pace he would offer a lot going forward.

A positive night for the Gunners ahead of an important league fixture for both clubs concerned. United need to get a run of wins together and Arsenal are in the same boat despite their convincing win in the League Cup last night.