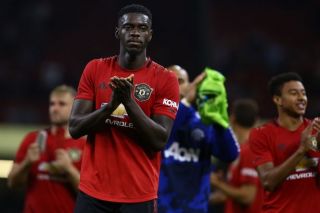 Axel Tuanzebe is in line to start against Rochdale in the Carabao Cup tonight and there could be a lot at stake for the young English defender.

Manchester United had a defensive disaster at the weekend against West Ham as Ole Gunnar Solskjaer’s side conceded two easily avoidable goals and lost the game 2-0.

That could yet be good news for Tuanzebe as he looks to force his way into the first-team.

Solskajer has shown his faith in the youngster by bringing him on the pre-season tour as well as consistent match-day inclusions since the season began.

Now Tuanzebe must start a Premier League match for the club.

READ MORE: Fred should use Rochdale clash as Arsenal audition

He can edge a lot closer tonight with a convincing display against the League One side, which won’t make him a certainty to start games by any means… but it would go a long way towards convincing Solskjaer he’s more ready than initially expected.

The manager hasn’t tested different centre-back partnerships in the league this season, with his decision to stick with Victor Lindelof and new signing Harry Maguire. It hasn’t been perfect so Tuanzebe should see tonight’s cup tie against Rochdale as the golden opportunity.

Tuanzebe impressed during the win against FK Astana last week.

It might be too soon for him to start against Arsenal on Monday night, but another encouraging display would only go in his favour.