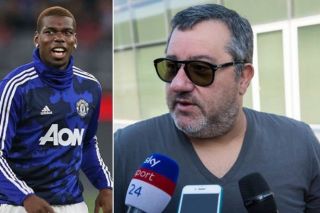 Paul Pogba and his infamous agent Mino Raiolo are set to demand a yearly salary of €35m (£30m) from Manchester United for the midfielder to sign a new contract.

That’s according to Okdiario, which if true would see the Frenchman earn a weekly wage of over €600,000.

A savage amount of money considering he is already lucky to be earning half of that on the back of below average form.

But with two years left on his current deal, as well as an option to extend that by a further year, the ball is firmly in United’s court.

By demanding a ridiculous wage, this looks like an attempt to force United’s hand and allow Pogba to join Real Madrid before his contract expires.

The Red Devils stuck to their guns in the summer though, unwilling to leave their most prized asset leave. Juventus, Madrid and Paris Saint-Germain are thought to have huffed and puffed but he remains at Old Trafford for another season at least.

It still feels like the 26-year-old has more to give United. His inconsistency torments the life out of us, but there’s no denying his talent.

Manager Ole Gunnar Solskjaer knows him better than most and must find a way — between now and the end of the season — to help Pogba go up the gears on a consistent basis.

A lot of this comes down to whether Pogba wants to be a United star or not.