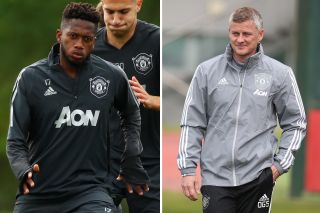 It may be harsh and I hope he proves me wrong, but Fred is one of the worst midfielders I’ve seen play for Manchester United.

That, of course, is on the basis of one season. A season in which the manager who brought him to Old Trafford, José Mourinho, clearly didn’t fancy him. Ole Gunnar Solskjaer gave him some opportunities but, again, the Brazilian was overlooked most weeks.

The former Shakhtar Donetsk midfielder tends to lose possession repeatedly and his worst trait by far, which doesn’t help when you’ve a small frame, is his tendency to run into traffic.

That said, Fred has impressed in his recent outings against Leicester City, FK Astana and West Ham. He deserves his opportunity against Rochdale and I hope one day I’m eating my words about him.

It was baffling at the weekend when it took so long for Solskjaer to bring Fred and Angel Gomes on against the Hammers. Losing and lacking in creativity, the Norwegian should have made his changes earlier and we paid the price.

After the match one stat emerged which revealed Fred completed more passes during his 20 minute cameo from the best than Andreas Pereira did in the entire match.

Playing centrally gave him an advantage over Pereira, who started the game on the right, but the attacking intent he offers is evident. We need to see that tonight.

Astana has already been noted as an impressive display for Fred, so it’s worth looking a bit further into that. Albeit against Kazakhstan opposition, it was his first start of the season and he finished the match with the most touches, most passes, highest pass completion, most long passes and the most chances created.