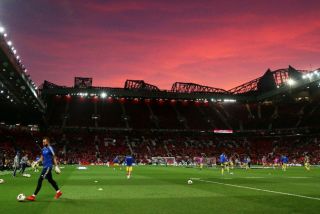 Ole Gunnar Solskjaer has named his starting eleven for Manchester United’s Carabao Cup clash with League One side Rochdale.

United’s form of late has been abysmal and we’re at a stage no opposition can be taken for granted. Solskjaer knows what pressure a bad result tonight will bring him and his players really need to put as run of wins together if they’re to make any progress this season.

We’re not going to win the league this season and the Europa League is no given. It would be a step in the right direction for Ole if he was to win a trophy in his first full season in charge, so let’s hope this is the start of a successful cup run.

As expected, the boss has fielded a young side tonight with one eye on Monday night’s Premier League clash against Arsenal.

Romero is back in goal while Tuanzebe is back in the heart of defence to steak a claim for future starting line-ups.

Pogba returns and is partnered by Fred in midfield while Greenwood leads the line with support on either flank from Chong and Andreas.

The same sort of line-up faced FK Astana last week and although United won the game, the overall performance was below par. The Old Trafford faithful deserve a display to sing about.