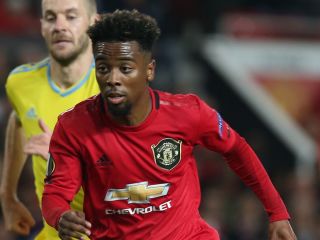 Angel Gomes is determined to prove himself in the Manchester United first team.

The playmaker has done so already in all of the youth teams and is set to make another senior appears in the Carabao Cup against Rochdale tonight.

Making his first competitive start for the club a week ago in the 1-0 win over FK Astana, the 19-year-old did more than enough to warrant a place on the bench at the weekend. Gomes came on as a substitute in the defeat to West Ham.

Gomes is excited to be involved again, when Rochdale travel to Old Trafford tonight and he’s keen to showcase his ability. He feels he is growing in confidence with the experience he’s gained in and around the first team thus far.

“It’s something I have worked for my whole life,” he told ManUtd.com. “I really don’t want to just see myself as a young player coming up now. I want to impose myself and impose what I can do, and not just show the fans but show the club what I am here for really.”

Even though it’s only the third round of the League Cup, Gomes is targeting success, as he believes it’s important for United to set strong objectives and he’s absolutely bang on about that.

“Growing up at United, winning trophies is all the club knows really,” Gomes added. “We’ll try to emulate that and get as far down the line as possible in the competition.

“No [I don’t think it’s too early to start looking that far ahead]. Not really. We’ve got to set standards and have the winning mentality. The higher standards we set, the harder we can work towards trying to achieve them.

“I thought I did okay [against Astana]. I tried to get into pockets and tried to go forward, when I could, to create chances. A personal aim is to create a few more chances and get a goal for myself or make a decisive pass that leads to a goal.

“It [showing skill on the ball] comes with confidence, and having more game time and, obviously, more opportunities to show yourself, so it’s something you can expect from the coming games.”

Gomes was also asked to reflect on League One opposition Rochdale and he expects them to come guns blazing.

“They’re a League One side, a tough team and physical but that’s part of the game anyway. Every team we play against will be physical, that’s a given, so I don’t really take that into consideration.

“We’ll try to play our football and attack as much possible, trying to show our strengths.

“They’ll come out all guns blazing, I would imagine. It’s a big game for them, they’ve not played against our club for a long time and they have an ex-United player in Oli Rathbone.

“I grew up watching him as he was two or three age-groups above me. I know him quite well so hopefully he’ll play and I’ll be able to play against him.”