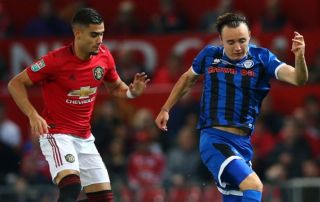 Andreas Pereira is right saying he expects a ‘tough’ game when Manchester United travel to Chelsea in the fourth round of the Carabao Cup.

The Red Devils were awful against Rochdale tonight and had to rely on penalties to progress after the match ended 1-1 after normal time.

All five of United’s penalties hit the back of the net with Daniel James scoring the winner.

Frank Lampard’s Chelsea booked their place in the fourth round after a 7-1 thrashing over League Two outfit Grimsby Town at Stamford Bridge.

“It is a good game, a tough game but we will try for it and try to win the game,” Pereira told MUTV after the draw was made, as quoted by the Manchester Evening News.

“It can be done, we will prepare for the game but for now we need to focus on the Arsenal game.”

United have been trophy less since 2017 and it will be a real challenge to end that mini-drought this season, unless Solskjaer finds a way to improve his side in front of goal.

Mason Greenwood scored the only goal in normal time for the Reds, making it two goals in his last two senior appearances for the club.

When asked about United’s ambitions in the Carabao Cup, Pereira stressed it is a trophy the team wants to win.

“I think we have to aim all the way, we have to take every game step by step but we are in it to win it.”

Taking each game as they come is all we can do at the moment. United should be blowing a League One side out of the water, especially at home, but tonight shows we can’t underestimate any side going forward.