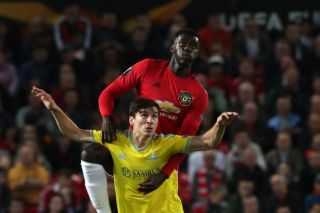 There’s a lot of hope for Axel Tuanzebe at Manchester United and he insists losing the place he held in the side over the pre-season tour to new signing Harry Maguire doesn’t change his mission.

Tuanzebe has been at the club a very long time. He progressed from the Under-9s and is not a substitute in the first team, yet still only 21-years-old with tons of potential.

He’s been sent out on loan to gain valuable experience and now it appears Tuanzebe is ready to take his chance under manager Ole Gunnar Solskjaer, who trusts the centre-half enough to shove defensive competitors in the squad down the pecking order.

The young English defender must be happy with his personal campaign to date; third-choice centre-back, a Premier League cameo and a clean sheet in his first European start. We’re hopeful it’s the start of a bright future at Old Trafford for the player.

“I probably would have liked to have been in the starting XI for Premier League games,” Tuanzebe says in an exclusive interview with the Manchester Evening News. “We’ve had a process with the manager, that process has been put in place. The game against Astana was again an opportunity to get my practice in to show people what I’m capable of, that I’m good enough to play for the club. And hopefully Rochdale will be another opportunity to demonstrate that again.

“The manager tries to pick a side that he believes is best suited to win games. Pre-season, I tried to demonstrate what I was capable of. Harry [Maguire]’s a great player, an experienced player, he comes in and takes number one choice. But, for me, it doesn’t change my task, it doesn’t change my mission, where or what I want to be.

“And I know it’s a process, I know it can take a long time. I know in time my opportunities will come and when they come it’s really down to me to grasp it and tale that first-team role.”

In regard to the process Tuanzebe is looking to take into the first team, he also dreams of captaining Manchester United. That’s some leap from where he is now, but it’s good to see youngsters coming through with big objectives.

He would have learned a lot about leadership from his time on loan at Aston Villa. John Terry was ahead of him in the pecking order the first season when they failed to advance from the play-offs, but the former England international then became a coach to Tuanzebe the following season as they gained promotion to the Premier League.

“It’s a personal ambition of mine. I’ve captained every age group of my Manchester United career. I started from Under-11s… maybe even younger, actually. Under-9s. So to captain one last team would be a great personal achievement for myself.

“Marcus [Rashford] has always been there as ell,. In terms of he has a different way to lead and different types of leadership. He sets an example by playing well every game. I had a different type of leadership, I’d always speak to people and bring the best out if them with simple words and I would also try and demonstrate on the pitch.”

Tuanzebe is almost certain to start against Rochdale tonight unless he picks up an injury before kick-off.