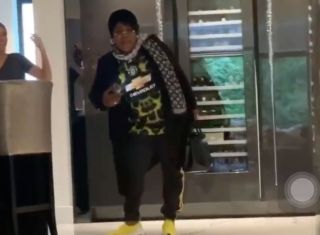 Paul Pogba often gets criticised for his social media activity. He doesn’t necessarily need to do anything out of order, but fans understandably get annoyed when they see a player always having fun when results on the pitch aren’t good enough.

But that shouldn’t stop someone from living their life and being happy. Pogba is a free spirit and in the clip shared to the United star’s Instagram story, you see him greet his mother who happens to wearing a limited edition Manchester United shirt.

From digital to physical, the shirt worn was part of a collaboration between Adidas and EA SPORTS, and it was launched during the 2018/19 season.

You can hear Pogba holding the phone to record the update for his Instagram, clearly delighted to see his mother arrived.

Even happier to see her wear some United merchandise.