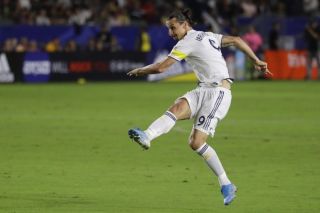 Ole Gunnar Solskjaer has been urged to bring Zlatan Ibrahimovic back to Manchester United in January.

The Swede made a big impact during his stay at Old Trafford, helping the club win the Europa League and the League Cup in a season that saw him score 22 times for the club. Unfortunately he missed the Europa League final with a serious knee injury, which contributed to the decision made by José Mourinho to allow him join LA Galaxy on a free transfer during the following campaign.

But the 37-year-old has been named as a potential target for United again.

The Red Devils are short up front this season after selling Romelu Lukaku and allowing Alexis Sanchez leave on loan. Neither attacker was replaced before the transfer deadline.

However, the prospect of Ibrahimovic rejoining United was addressed by Solskjaer earlier this season, with the boss sending out a mixed message.

Former United star Clayton Blackmore, who starred for the Red Devils in the late 1980s and the early 1990s under Sir Alex Ferguson, believes re-signing Ibrahimovic is a no brainer. Check out his tweets on the former Sweden international below:

Europa cup league cup and charity shield 🛡 when he played for us 13 years ago the Barcelona goalie out run Zlatan he doesn’t run much yet he scores goals every club he plays for. We need a target man so all our kids with pace can play off him 4-4-2. 👍🏼😁⚽️ and close down quicker

Here end the lesson it’s a no brained 🧠 👍🏼😁🏴󠁧󠁢󠁷󠁬󠁳󠁿

Ibrahimovic turns 38 next month though, and Solskjaer thus far has been the type of manager keen on signing younger players with tons of potential. The manager’s oldest recruit — Harry Maguire — signed in the summer, aged 26.

He touted himself for a return to Old Trafford earlier this season, saying (via Independent): “I could play easy in the Premier League, so if United needs me, I’m here.”

Do you think Solskjaer should bring Ibrahimovic back to United in January?