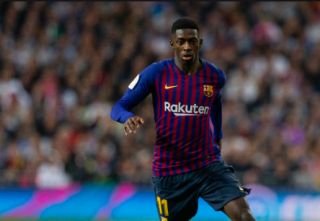 That’s according to the Independent, who claim boss Ole Gunnar Solskjaer is keen for reinforcements after being left threadbare in attacking options.

The sale of Alexis Sanchez and Romelu Lukaku this summer meant United were left with just Marcus Rashford, Anthony Martial and Mason Greenwood as the recognised strikers.

Injuries to Anthony Martial and now Marcus Rashford, who suffered a groin problem in the 2-0 defeat to West Ham, mean Solskjaer has somewhat of an injury crisis on his hands.

NEXT:Alan Shearer tells Marcus Rashford what he must do to improve at Man Utd

It is believed Barcelona’s Dembele is currently ‘under consideration’ at Old Trafford. The 22-year-old is still seen as one of the most promising French talents, despite scoring just 8 La Liga goals last season.

However, the report claims it would take a bid in excess of £100m to bring him to the club.

Meanwhile, the Reds are reportedly ready to go back in for Juventus striker Mario Mandzukic.

Solskjaer sees the Croatian as a potential back up striker to Anthony Martial and Marcus Rashford. There are concerns over the 33-year-old’s age, but these worries could be outweighed by the sheer need to bolster squad depth.

The Reds need attacking and midfield reinforcements in January, and it will be interesting to see if Dembele or Mandzukic would be interested in moving to Old Trafford given the current state of affairs.