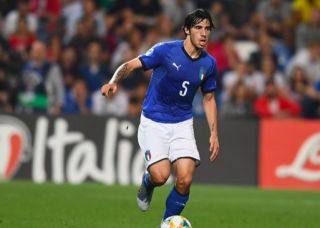 That’s according to the Daily Star, who claims United have sent scouts to watch the 19-year-old against Serie A champions Juventus tonight.

Tonali’s classy playing style has led to many likening him to Italian great Andrea Pirlo, and the midfielder was a key part of Brescia’s promotion success last season.

The report claims that Tonali is already valued at around £45m, a hefty price for a player with such little experience.

He played in this summer’s u21 European Championships with Italy, after receiving his first full international call-up in November after being a surprise inclusion in Roberto Mancini’ squad.

The talented midfielder is  said to be coveted by Juventus, Borussia Dortmund, Valencia and Roma who are all also interested in his signature.

Despite still commanding a heft price, Tonali would be a cheaper alternative to Declan Rice, another defensive midfielder the Reds have been linked with.

West Ham have no urgency to sell Rice, and he would obviously come at a premium given he is young, British talent.

Ole Gunnar Solskjaer needs a defensive midfielder with an ability to control games, but Tonali still needs to impress in Serie A this season to prove he can play the role adequately at Old Trafford.