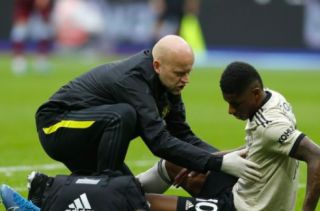 Manchester United have provided an injury update ahead of Wednesday’s Carabao Cup tie against Rochdale at Old Trafford.

Anthony Martial and Luke Shaw are still ruled out after injuries sustained in the defeat to Crystal Palace last month.

The pair have proved big losses for the Reds in recent matches, and Ole Gunnar Solskjaer is particularly missing the threat of Martial leading the line.

To further Solskjaer’s injury woes, Marcus Rashford has also been ruled out after picking up an injury in Sunday’s 2-0 defeat away to West Ham.

The extent of Rashford’s groin injury is not yet known, but Solskjaer will be hoping it’s not too serious as he is quickly running out of attacking options.

Mason Greenwood is now the only fit recognised striker at the club, and may lead the line against the League One opposition on Wednesday if he recovers from his bout of tonsillitis, which ruled him out of the game against West Ham.

Meanwhile, there is some positive injury news as it appears Paul Pogba will return and feature on Wednesday night.

Solskjaer is confident the Frenchman will be back to full fitness for Monday’s game at home to Arsenal.

“He’ll probably get some minutes against Rochdale, but we definitely think he’s ready for Arsenal,” the Norwegian told the United app.