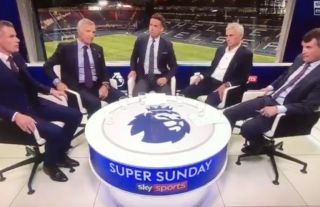 Roy Keane knows exactly when to step in with a punchline.

The Manchester United legend jumped at the perfect opportunity on Sky Sports yesterday and it was Jamie Carragher and Liverpool who felt the rash of the Irishman’s brutal honesty.

Keane in many ways epitomises a winning mentality. His coaching career has hit some highs, as well as lows, but things tend to turn sour when players he’s managed don’t take their careers as serious as he did.

In the studio, Carragher looks at Liverpool before and when they had Luis Suarez. The Uruguayan made a positive difference on the pitch when he wasn’t passing racist slurs to members of the opposition or trying to bite their arms off.

The former Liverpool defender argued that United could do with one player who can take them from being a sixth place side, or lower, and back in contention to win the league.

But Keane jumped at how Carragher spoke about Liverpool “almost winning the league.” The fact of the matter is… they didn’t!

See how he reacted below (as seen on Sky Sports Premier League):