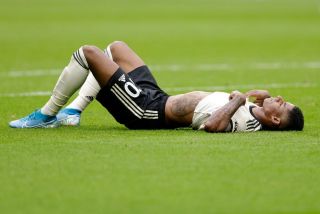 Marcus Rashford is a player with undoubted talent.

His rise to the first team from youth level has be meteoric but his form has radically dipped.

He has been the focal point of United’s attack since Anthony Martial’s injury.

As much as the club are going through a rebuild, Rashford is also.

His form has mirrored the team in fairness.

He has played in every attacking position in manly a front three over the last few seasons. His versatility has undoubtedly hampered his growth as a pure goal scorer.

Strikers are selfish and crave goals. I have mentioned before in previous articles that Sergio Aguero and Harry Kane are prime examples of this.

Yes, Rashford is a different kind of forward but he now has to develop that killer instinct to take his game to another level.

Top level players draw the keeper out and making them commit and finish with finesse or power. They make defenders and Goalkeepers second guess their intent.

During this past week against Astana he missed two guilt edged opportunities. Two chances that he really needs to be tucking away.

Ole Solskjaer commented in his press conference before the West Ham fixture, as quoted by Off The Ball: “One chance against Astana he could have finished with his left instead of his right but we are working with him every single day in training because he wants to improve.”

“There are not many traditional number nines left now. Marcus can play right, left, up front on his own, or as a number 10.

The Reds create chances but they really need to be ruthless in front of goal with this largely in transition squad.

His game needs to develop beyond just playing off the shoulder of the defender. Marcus can’t just kick the ball past a defender and try to out pace them.

And let’s not even talk about his free kicks…

Rashford has maybe got off lightly with the fans as he is a local lad but this type of form must be alarming for those around the club.

This shouldn’t sound like he is being written off at all but it’s his next stage of development that is going to be interesting to witness. Season by season he has been given more responsibility up top and there have been some outstanding contributions. Flashes of brilliance and let’s not forget that he had the minerals to take that crucial penalty in Paris.

Missing one penalty one week but stepping up again against Leicester showed his strong character.

He certainly has other traits that would take him to a higher level.

It’s easy to forget he is only 21 and has scored 48 goals for the club in all competitions.

Disappointing results and performances won’t hold water for long though.

Once again, players left over from a dark era are trusted to provide the ammunition for Rashford.

Ole has run out of alternatives. Some of the supposed dead wood are gone but have not been replaced.

Juan Mata was trusted with his preferred attacking midfielder role against West Ham but little changed. Angel Gomes is an option but with limited experience it really is asking a lot from the young lad.

To compile the misery, Rashford limped out of the game and now United face the reality of their lacklustre summer recruitment. Again.

We all know letting go of certain players was necessary but so is timing.

I find it hard to believe that Ole would let Romelu Lukaku leave and not have a replacement in mind. The same goes for central midfield as well.

It was suggested by Ole that targets they wanted were not available and not the required quality. But where was Plan B?

At United it seems managers/coaches don’t have the influence on transfers that they would like to have.

Of course, this is all conjecture but let’s be logical about this. The first team staff at the club must have drawn up a list of players they wanted and alternatives. For me, the three signings we made were on that list.

Lukaku sat out all the pre season games which suggests a move was muted for a while. In all that time in the summer, there must have been a replacement lined up? If not, then that is absolute madness. I don’t think many would have been completely convinced by Rashford and Martial being our only options. Mason Greenwood is a talent but he is 17.

You have to think the first team staff had a few suggestions and the club couldn’t get the deals done. We know the money is there but the willing and foresight from the people above is non existent.

Jose Mourinho said on Sky Sports coverage of the game yesterday ‘…that’s why I was begging for a centre back..’

Regardless of what you thought of his tenure at Old Trafford, one of the most successful managers of all time ‘begging’ the club to buy in a position we badly needed last summer.

That window we bought Fred, Lee Grant and Diego Dalot.

They have worked out well haven’t they!?

This past transfer window was definitely an improvement and there is definite direction with the current management. Whether Ole  Solskjaer gets to see that through, develop the players he has and the youngsters he is pushing through is another story.