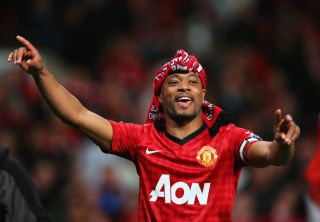 Patrice Evra would try and sign Paulo Dybala if he was in charge of Manchester United’s transfers.

The Red Devils are still being criticised for their business last summer after failing to replace Ander Herrera and Romelu Lukaku.

As a result, United are short in midfield and up front as it looks like another challenging season for the Old Trafford outfit.

While summer recruits Aaron Wan-Bissaka, Harry Maguire and Daniel James have shown promising glimpses early on, more could have been done to ensure manager Ole Gunnar Solskjaer had a successful first campaign in charge.

For years, United fans have vented their frustration towards the Glazer family, who see the club as no more than a commercial cash cow.

At a recent fans’ forum, a Manchester United spokesman told ESPN that the club prioritises success on the pitch over money, which we found laughable.

And the 2-0 loss to West Ham was seemingly the final straw for Evra.

He posted on Instagram with a caption aimed at the United board, saying: “I think it’s time to get our hands dirty!

Evra also made it clear in the comments section who his first signing would be, if it were up him.

One user asked Evra to “handle the transfers for the club,” while he replied: “@paulodybala will be my first.”

Evra has connections at Juventus from his time at the club, so it would be interesting to see if he could use them to get a deal over the line.

Moreover, United were closely linked with a move for Dybala in the summer.

Another commenter joked that Dybala would prefer a switch to Tottenham over United, to which the Frenchman simply replied: “Keep dreaming.”

United are currently eight in the Premier League — 10 points behind rivals Liverpool — and we’re nearing the end of September.

And it’s probably going to get worse before it gets better.