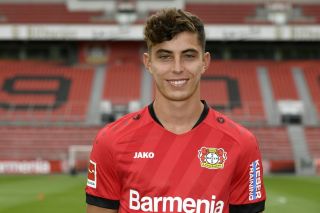 Manchester United and other interested clubs have reportedly been told it will cost them £90m to clinch the signing of Bayer Leverkusen midfielder Kai Havertz.

The 20-year-old is seen as one of the brightest prospects in Europe at the moment, and he’s the type of all-rounder who could make a difference in the current United team which is notably weak in midfield and lacking in balance.

United are among the top teams interested, as per The Express, and Leverkusen are said to be asking for around £90m. Man City and Liverpool are also said to be interested in Havertz.

Considering the valuation of upcoming stars nowadays, we shouldn’t be shocked that it could cost United as much as £90m to secure a deal to sign Havertz but surely something has to change at some point.

Moreover, manager Ole Gunnar Solskjaer seems to always have his eye on young talent coming through, so there’s every chance United will target the young German.

The club ignored the need to replace Ander Herrera in the summer and are paying the price for that now. Paul Pogba doesn’t look any better this season but there is hope for Fred yet after some encouraging signs the past week.

We’ll keep our eye out for any updates regarding Havertz and United over the coming months.