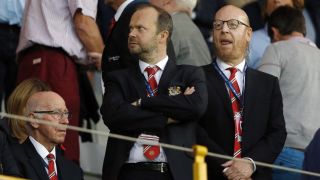 Manchester United have issued a statement to assure supporters that the club is committed to “competing for trophies at the highest level”.

Although they’re attempting to tell us success on the pitch comes before making money, nobody is going to believe it.

United lost 2-0 to West Ham on Sunday and now the pressure is set to build on manager Ole Gunnar Solskjaer.

The Norwegian is the fourth man appointed to manage the Red Devils since Sir Alex Ferguson retired after winning the league in 2013. That was the last of United’s 20 league titles and in the subsequent six seasons the club has been rightly criticised for the way they have balanced commercial success when building a team capable of challenging for the top honours.

It will come as a surprise to nobody that the Glazers have been using Manchester United as a commercial cash cow. Ever since their controversial takeover in 2005.

ESPN quote what sounds like a statement from a United spokesman, not that we believe any of it with clowns like Ed Woodward getting away with all sorts whilst running the club.

“Everyone at the club, from the owners down, is focused on competing for and winning trophies at the highest level. To do that we have invested heavily in the playing squad and will continue to do so.

“At the same time, the exciting pool of talent coming through from our youth and academy sections is a result of increased investment in this area over the last five years. It’s important to note that while our successful commercial operation helps drive that investment, the priority is the focus on achieving success on the pitch.

“Similarly, it is worth noting that we are not looking at or buying players based on their commercial appeal. We agree that recruitment is critical. We are committed to getting this right and there has been huge investment in this area to put our recruitment department into a position to be able to deliver the manager the players he wants. This process is significantly more effective than four or five years ago.”

No comment from the Glazer family. Not that we’ll ever get one of those from the parasites.