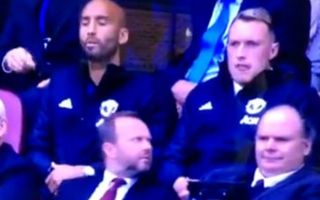 Ed Woodward and Phil Jones were caught on camera during Sunday’s 2-0 defeat against West Ham.

Some thought the Manchester United vice executive-chairman had a snap at Jones, but that doesn’t appear to the case at all.

United were beaten convincingly at the London Stadium as our start to the season worsens. Goals from Andriy Yarmolenko and Aaron Cresswell sealed the three points for the hosts as the Red Devils looked miles off from the very beginning.

Since taking the job full-time towards the end of last season, United have been beaten seven times in 15 Premier League matches.

Initial reports on Twitter claimed that Jones was making a joke about Solskjaer being sacked, with Woodward responding ‘We’re on camera, stop.’

None of us are lip reading experts, though it turns out that the assumption that Woodward was snapping at Jones is in fact rubbish, even if the video below makes it look true (as seen on Sky Sports Premier League):

Phil Jones: “Sacked in the morning.”

However, Woodward wasn’t actually speaking to Jones. His head turns to speak with Manchester United Head of Communications Karen Shotbolt.

Contrary to popular opinion Woodward is not taking to Jones but the woman next to him.
But who is she 🤔 pic.twitter.com/wcOjbBu980

He’s not talking to jones there

So, there’s even more reason to be wary about what you read online.

United legend Roy Keane said afterwards that he was ‘saddened’ to see the state the club is currently in.

“I don’t know where to try, I know they weren’t in a great place but I am shocked and saddened by how bad they are,” Keane said on Sky Sports, as quoted by The Express.

“No quality. A lack of desire. A lack of leaders. A lack of characters. It is a long way back and it is scary just how far they have fallen.”

Next up in the league for United is Arsenal…