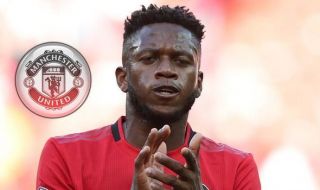 Fred being named as a substitute against West Ham came as a bit of a shock.

The Brazilian did well off the bench in Manchester United’s 1-0 win over Leicester and impressed against FK Astana during the week.

But he came on with 20 minutes remaining on Sunday. United were already losing but Fred still offered some encouraging signs.

United were static and predictable in midfield throughout the match, though Fred’s introduction gave some much-needed energy to our play. It’s just a shame we didn’t have it earlier instead of Nemanja Matic, who, let’s face it, is way best his best.

Fred was responsible for creating two chances in 20 minutes, just days after assisting Mason Greenwood against Astana, as he continues to try show his worth under manager Ole Gunnar Solskjaer.

Andreas Pereira, who played in a more wider role than usual, managed just one more pass than Fred despite playing 90 minutes…

With Paul Pogba out injured, Fred is now looking like one of the best options available to Solskjaer. He should definitely start against Rochdale in the League Cup on Wednesday!

Here’s a look at how United fans reacted to Fred’s substitute performance:

Freeze Mata and Matic out the squad, they get upset I couldn’t care. Not good enough. Least we had energy and played forward with Fred and Gomes. #mufc

He needs to give Gomes and Greenwood more minutes.

He needs to drop Matic and Mata immediately.

If he does this and we still aren’t playing better, then I’ll be extremely worried with Ole as our manager #MUFC

Pogba and Fred might lose the ball, sometimes unnecessarily but atleast it’s to make things happen. Matic and Midtominay lose the ball doing nothing.

So when are we gonna actually start Fred over Matic? Becoming tedious now.

those forward passes and chances being created all because of Fred. if we can see it, Ole has no excuse. terrible decision maker. needs to go. #WHUMUN

Fred’s put more meaningful forward passes than the rest of the team combined and we started Matic over him… if I am not wrong, he’s the only player who has created a chance for us from open play apart from the Pereira cross

Fred should please be starting matches. Thank you. Moves the ball much much quicker than Matic, and actually passes forward. Passed the ball forward more times in 20 minutes than Matic did for this match and the last

I actually think Fred is a better option than Mata in such games. He is not a No.10 but he can certainly play as a No.08 & he is a lot quicker than Mata & much more aggressive! @ManUtd