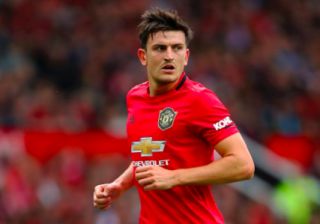 Ole Gunnar Solskjaer says Harry Maguire is being considered for the future captaincy at Manchester United.

Maguire has impressed in central defence alongside Victor Lindelof since his summer move from Leicester City.

His world record transfer had raised questions amongst football fans, but Solskjaer needed an established centre-half this and Maguire was his priority target.

Ashley Young is the current club captain at the club, but Solskjaer will be looking for further leaders when the full-back begins to feature in fewer games.

David De Gea has taken the captaincy so far in Young’s absence, but does not share the same vocal leadership qualities as Maguire.

Solskjaer is lacking leaders in his squad at United and Maguire is an obvious candidate given his leadership skills shown in his time leading the defensive line at Leicester.

See what the United boss had to say about Maguire below ahead of today’s game against West Ham:

Ole: “Maguire a leader? He does, he’s already been in my head as a future captain. On the pitch, he’s a leader. Off the pitch he’s a top professional, he’s vocal. I’m very pleased on the money we spent on him. He’s one looking like we can give the band too, yeah.” #mufc [Sky]