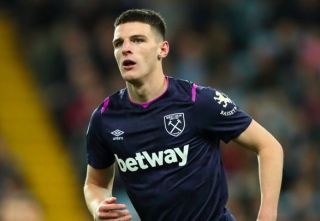 Manchester United can go third in the Premier League with victory over West Ham at the London Stadium this afternoon.

The hosts have enjoyed a solid start to the season, and will provide a stern test for Ole Gunnar Solskjaer’s side without key players Paul Pogba and Anthony Martial through injury.

We spoke to the Athletic’s West Ham writer Roshane Thomas about today’s opposition.

Just how good is Declan Rice? Do you expect him to soon move to a top six club?

Declan Rice is the real deal. He’s one of the most exciting young players in English football. Worth noting he is only 20-years-old, not 21 until January, and no midfielder in the Premier League has made more tackles than Rice so far this term. It wouldn’t surprise me if a top four club signed Rice in 18 months time.

Who are West Ham’s main threats to watch out for?

United have reportedly been tracking Jamal Baptiste. Can you tell us anymore about the highly rated young defender?

Jamal Baptiste is an exciting young talent. He is only 15 and recently played for the U23s and looked comfortable on the ball throughout the entire 90 minutes. West Ham should do everything they can to keep hold of Baptiste.

Another player the reds were linked with this summer was Issa Diop. Could he warrant the reported £75m fee that was quoted this summer?

In all honesty Issa Diop’s form has dropped so far this season. Last season his defensive partner was Fabian Balbuena but, barring the first game against Man City, Manuel Pellegrini has opted for the defensive pair of Diop and Angelo Ogbonna. It seems the speculation of a move to Old Trafford has somewhat had an impact on his form. But he has the chance to put things work today against United.

The disgruntlement around the Hammers moving to The London Stadium in 2016 was evident amongst supporters. Have attitudes since changed and how does the atmosphere compare to other Premier League grounds?

The supporters still miss Upton Park and that will never change. Stating the obvious the fans are far away from the pitch. I recently interviewed Stewart Downing and he believes the atmosphere in the London Stadium is ‘dead’.