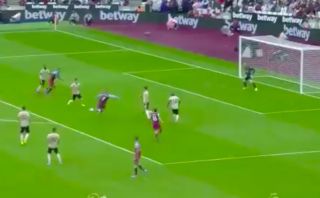 Manchester United’s first half performance against West Ham has been dire at best.

There’s been no energy or urgency in Ole Gunnar Solskjaer’s side, and are now deservedly behind at half-time.

The game was ambling to a 0-0 scoreline at half-time, before the home side delivered the first real piece of quality in the game.

In an intricate move on the edge of the box, Felipe chipped a through ball into Andriy Yarmolenko’s path. The Ukrainian international brought the ball down well and finished with precision into the bottom corner.

There was nothing David De Gea could do to stop the effort, but United’s lack of closing down has to be questioned.

Finding a way to score two goals and now win the game looks extremely unlikely given the lack of creativity in United’s team.

What a beautiful goal this was from West Ham. Brilliant build-up and a sublime finish by Yarmolenko. Well-deserved lead, definitely looked the better side in this first halfpic.twitter.com/YUVQJjf0d1

amazing movement for yarmolenko on his goal. he just snaked around ashley young after passing it up and popped up in space. pic.twitter.com/RwrCRACLt7