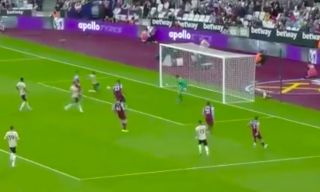 Juan Mata has somehow missed a glorious opportunity to level the scoring against West Ham United at the London Stadium.

The Spaniard, who has not been anywhere near his best this afternoon, failed to convert Andreas Pereira’s cross following a swift break starting with a driving run from Scott McTominay.

Mata was stretching for the ball at the back post, but once he reached to make full contact on the ball then he had to finish.

Ole Gunnar Solskjaer’s side have been poor all over the pitch, and Mata’s miss has summed up what we have seen so far.

Let’s hope the Reds can get back into the game in the latter stages of the second-half.

It's an unbelievable chance for Manchester United but it's off-target! ❌