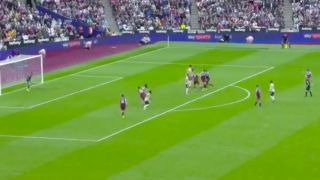 His late free-kick compounded Ole Gunnar Solskjaer’s misery on an awful day for the Reds.

United have not won an away game in the Premier League since February and were comfortably defeated 2-0 against a superior West Ham side today.

The Reds were lethargic all over the field, and were starved of clear-cut opportunities against a side they should be beating if there were any real top four ambitions.

After coming close from a set-piece earlier, Cresswell buried his effort from around 25 yards out, curling home beyond David De Gea into the top right corner.

Another concern after the result for Solskjaer is the injury picked up by Marcus Rashford, meaning he now doesn’t have a fit striker to select at the club.

Aaron Cresswell, that is superb! 🎯

It's a peach of a free-kick as West Ham pile the pressure on Manchester United! 🍑⚒