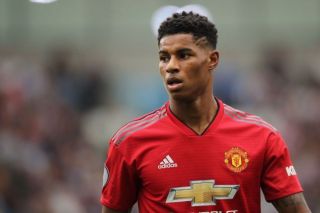 Paul Pogba, Luke Shaw and Anthony Martial were all ready ruled out of the game through injury, and Rashford’s knock is now the latest setback.

Mason Greenwood was also ruled out today through illness after his impressive performance on Thursday against FC Astana.

The England striker was replaced by Jesse Lingard, who has had to play in the centre forward position as Solskjaer simply has no other options.

Lingard having to be deployed in the role perfectly evidences just how poor United’s recruitment has been over a sustained period of time to have such a weak squad.

Romelu Lukaku and Alexis Sanchez were both sold this summer with no replacement brought in, leaving Solskjaer threadbare in attacking options.

Let’s hope Rashford’s injury is not too serious as the Reds cannot afford to have another serious injury lay off.

Now that Marcus Rashford has gone off injured, we’ve only got one fit recognised striker, and that’s our manager.

United chose not to sign a replacement for Lukaku, who scored for Inter again last night. Martial is injured (again), Greenwood is ill and now Rashford is injured. Could hardly be any worse. #mufc