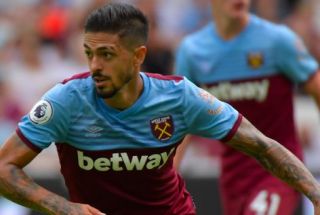 The Argentine midfielder has picked up what has been described as a ‘small problem’ by boss Manuel Pellegrini.

Lanzini has been a key figure in a solid start to the season, starting all five games with the Hammers’ sitting in eighth position.

The 26-year-old is one of Pellegrini’s most dangerous attacking outlets, so his absence would be a real blow against the Reds.

Speaking in Friday’s press conference ahead of the game at The London Stadium, Pellegrini provided a brief injury update:

“Winston Reid is still recovering. Hope that next week he will start working with the squad. Manuel Lanzini has a small problem we will review before the game,” he said as quoted by Football.London

United, meanwhile, have injury problems of their own ahead of the game.

Paul Pogba, Anthony Martial and Luke Shaw are all set to be ruled out of the game again through with injury, with Daniel James also now a doubt.

The injuries could provide the chance for youngsters Mason Greenwood and Angel Gomes to start together in the Premier League after impressing in the 1-0 Europa League victory over Astana.