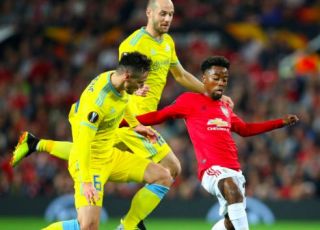 Angel Gomes is in talks to sign a new contract at Manchester United.

The 19-year-old’s current deal runs out next summer with the club reportedly keen to tie him down to a new long-term deal at Old Trafford.

Manchester Evening News report that negotiations are not yet at an advanced stage, and Barcelona have registered an interest in the youngster.

Gomes made his first senior United start in the 1-0 Europa League victory over Astana at Old Trafford.

The attacking midfielder will now be looking to play regularly in the first-team under Ole Gunnar Solskjaer, after making his debut against Crystal Palace in May 2017.

The report claims Solskjaer rejected Gomes’ chance of a short loan spell in January, and he is now being integrated more into the Norwegian’s first-team plans.

Gomes clearly has huge potential and will only get better with more game time, so agreeing his new deal should be high up on the list of priorities at Old Trafford.

The youngster could feature away to West Ham on Sunday, with Anthony Martial still ruled out with the thigh injury sustained in the defeat to Crystal Palace.