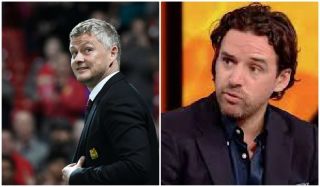 It’s unlikely that the England duo will be moving from their current clubs in January, so the BT Sport pundit was clearly referring to the transfer window next summer.

The Norwegian also left Marouane Fellaini leave shortly after arriving at the club and like Herrera, the Belgian was never replaced by an alternative midfield signing.

United kicked off their Europa League campaign on Thursday night with a 1-0 win over FK Astana thanks to second-half goal by Mason Greenwood, his first for the club.

Speaking after the match, Hargreaves defended the progress Solskjaer has made at Old Trafford and says Sancho and Rice would speed up the club’s development.

“It takes time with young players, you never know sometimes what you’re going to get,” said Hargreaves (quoted by The Metro).

“Can United ‘out football’ Liverpool and City? No. United’s two wins in the Premier League this season against Chelsea and Leicester have been when they’ve counter attacked.

“Ultimately you’ve got to find a way to win games. I think the next phase is getting players that can make the difference. I think Declan Rice at the base of the midfield in this team makes a difference. I think Jadon Sancho would be a perfect player for this team and they need a no.9 whoever that may be.

“It’s a work in progress and it’s going to take time but at some point they’re going to have to invest. Eventually you have to buy.

“Declan Rice fits in here — whether it’s £50m, £60m — he fits in here. He fits the model of being young and British. Sancho is nailed on for this team even if you pay €120m for him he’s there for the next decade. You almost can’t overpay one a player like Sancho.”

United chiefs met with Borussia Dortmund over the talk to talk about Sancho, as reported by The Independent’s Miguel Delaney, though nothing materialised. He would be a top signing for the team but there’s no way he’d sign without Champions League football.

I’d welcome Rice as a replacement for Nemanja Matic, who was poor again last night, though West Ham will demand more than what Hargreaves is expecting. Probably closer to the £80m mark.