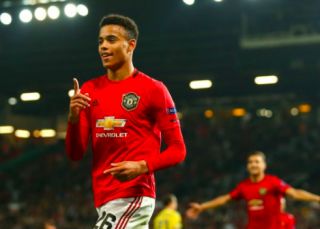 Michael Owen believes Mason Greenwood will be called up to Gareth Southgate’s England squad when he starts playing regularly for Manchester United.

Greenwood scored United’s only goal in a 1-0 victory over FK Astana, his first senior goal for the Reds.

The 17-year-old’s finish was the only real piece of quality on the night, with Ole Gunnar Solskjaer’s side failing to convert a hatful of chances against the significantly weaker opposition.

Solskjaer has already described Greenwood as the most natural finisher at the club, and his strike last night saved United’s blushes in what should have been a comfortable night at Old Trafford.

The youngster already made two appearances for Aidy Boothroyd’s England squad earlier this month, but Michael Owen expects him to get his first senior call-up if he begins to start consistently under Solskjaer.

“He’ll have a part to play in the Premier League, no question,” Owen said on BT Sport, as quoted by Manchester Evening News.

“His goal record at youth level is phenomenal. In my mind he’s going to be a proper Manchester United player for a long, long time. He’s doing this on a weekly basis, playing with these players. He’s desperate now to start with the big boys. They will feed him even better balls, and he’ll quickly prove he’s good enough to play in the first team already.

“It’s all a mental thing now. He’s good enough. He’ll think a bit differently to a lot of the players because he’s probably been carrying the youth team.

“As soon as he starts playing regularly for Manchester United he’ll be in the England squad.”

There shouldn’t be too much pressure put on Greenwood at such a young age, but Solskjaer knows he is one of the most talented players to graduate from the academy.

If Greenwood does excel in the first-team this season, then he could be in line for selection for Southgate’s UEFA Euro 2020 squad next summer.

The striker will now be looking to make an impact in Sunday’s Premier League match away to West Ham.

It’s a game United need to win to build momentum after the consecutive narrow victories over Leicester and Astana.

Man Utd FINALLY have the breakthrough vs Astana…

And it just had to be Mason Greenwood 🙌