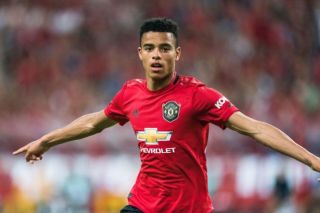 Mason Greenwood will sign his new Manchester United contract ahead of his 18th birthday on October 1.

That’s according to Joe Moles of The Sun, with the England Under-21 striker scoring the only goal in last night’s 1-0 win over FK Astana at Old Trafford.

It is claimed that Greenwood will see his weekly wage rocket from £800 to £25,000 once he puts pen to paper.

With him now getting a taste for first team football under Ole Gunnar Solskjaer, there is no talk of complications over any deal. Greenwood has every reason to be happy at United and should commit his long-term future to the club.

The Sun add that his wage will increase by £10,000-per-week every year if he continues to impress at Old Trafford.

Right now, it looks like the sky is the limit for Greenwood, who joined the Red Devils at the age of six, but only signed his first professional contract with the club less than a year ago.

If he keeps playing and scoring goals, Greenwood is bound to put pressure on Marcus Rashford. That should do his team-mate the world of good.