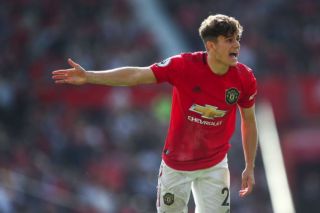 To add to the blow, Daniel James is also a doubt for Sunday’s fixture against West Ham.

Solskjaer spoke to the press ahead of the West Ham game on Thursday night. The quotes were under an embargo till 10am this morning.

Pogba is out with an ankle injury and has not played since the 1-1 draw with Southampton three weeks ago.

Meanwhile, fellow Frenchman Martial sustained a thigh injury in the defeat to Crystal Palace on August. Both players missed out on international duty as a result.

Shaw came off with a hamstring injury against Crystal Palace and won’t be in the match day squad this weekend, which means we’ll see either Ashley Young or Marcos Rojo at left-back.

I’d probably opt for the forever rash Argentine. He’s got better legs than Young who should only be playing when Ole Gunnar Solskjaer has no other options…

“Not really, no,” Solskjaer said when asked if Pogba and Martial would be fit, as quoted by the Manchester Evening News. “They’ve not been training yet so I don’t think so. [Luke] won’t be ready.

“Daniel James? I don’t know. He’s not trained the last few days. Hopefully, but not sure. We’ll have a recovery day with everyone tomorrow and we’ll see on Sunday.”

The jury is still out on James’ fitness. He picked up a knock last weekend in the 1-0 win over Leicester City and missed out on Thursday night’s Europa League victory against FK Astana.

That would give either Angel Gomes or Mason Greenwood a chance to start their second consecutive game for the club. Both were highlights last night and deserve more minutes on the pitch.

If you’re good enough, you’re old enough, and all that…