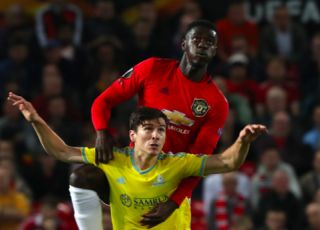 Axel Tuanzebe is the only Manchester United player included in the Uefa Europa League team of the week.

The 21-year-old kept a clean sheet alongside Phil Jones in defence, and looked assured throughout.

It was an encouraging first competitive start of the season for the young defender, albeit against significantly weaker opposition in Astana.

Tuanzebe is looking to compete with Victor Lindelof to start in Ole Gunnar Solskjaer’s first-choice centre back pairing alongside Harry Maguire.

The youngster was excellent in pre-season, and has established himself as the third choice central defender at Old Trafford.

Meanwhile, Mason Greenwood was surprisingly left out of the Fedex Performance Zone team, despite proving the difference in the narrow win.

He showed great composure in his finish for United’s winner, providing a real moment of quality after the Reds squandered a handful of clear goalscoring opportunities.

See the team of the week in full below: