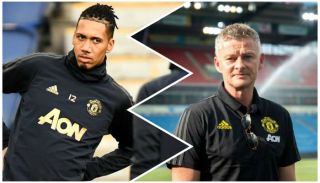 The 29-year-old made the season-long loan switch to Serie A giants Roma this summer, following the arrival of Harry Maguire from Leicester City.

It was a brave decision by the defender to make the move to Italy, given the easy choice would have been to stay in Manchester and remain back up for Victor Lindelof and Maguire.

Speaking in an exclusive interview with the Telegraph, Smalling revealed why he left Old Trafford:

“He (Solskjaer) said I would get games.

“I am used to playing when I am fit. Although that might have been slightly different this season, I would have had the cup games and then in the league, depending on injuries.

Smalling’s exit has given the chance for Axel Tuanzebe to compete for a position in Solskjaer’s first-team defence.

Tuanzebe looked assured in his first start of the season against Astana last night, albeit much weaker opposition than he would be facing in the Premier League.

The 21-year-old will be pushing Victor Lindelof for a first-team spot, after the Swedish defender’s shaky start to the season.