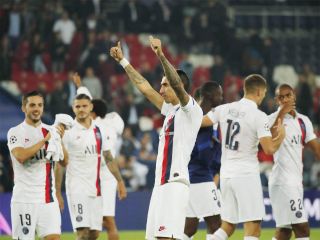 A number of Manchester United fans took to Twitter to give their reaction to the performance of Di Maria as he faced one of his former clubs. The French got off to a winning start in Group A by beating Zinedine Zidane’s side 3-0 in Paris.

What a terrible start to the Champions League it was for Los Blancos, who, even with incredible players in attack, looked utterly confused by whatever their tactical approach was during the game.

The 31-year-old Argentina international scored a first-half brace to stun his former side, and some United fans joked about how Di Maria tends to always show up against clubs he once played for.

Di Maria has been much better for PSG than he was at United. He really struggled in the Premier League and there was questions asked about whether he even wanted to be there at the time.

He played for United during the 2014-15 season, Louis van Gaal’s first in charge, and started off strongly before suffering injuries and fading off. Nobody lost sleep when he left.

Below are some of the best comments from Reds reacting to Di Maria’s performance last night:

He truly unleashed his ‘demon’ when facing his old clubs. #PSGRMA #UCL

I hate Di Maria with a passion. But he is a wonderful player. A shame his head want in it because he is exactly the sort of player that would have set old Trafford alight #PSGRMA

Angel di maria only turns up against ex clubs

Definitely one of those players that struggled due to timing of being at Utd , any other year and he’d have been a success