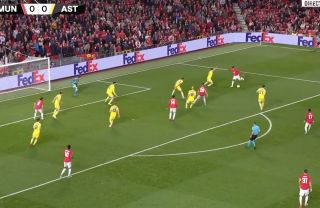 Mason Greenwood has opened the scoring for Manchester United against FK Astana.

The 17-year-old has scored his first senior goal to put the Red Devils ahead in their first Europa League match of the season.

Greenwood chopped in from the left, pushing the ball onto his right and confidently slotted the ball home through the goalkeeper’s legs.

Astana’s keeper had done well all night but will be criticised for conceding a goal from his near post.

But we couldn’t care less about that. United’s goal was coming after creating a number of chances from the early stages of the match.

Man Utd FINALLY have the breakthrough vs Astana…

And it just had to be Mason Greenwood 🙌