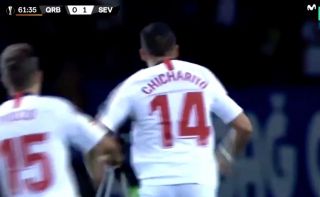 The Mexican opened his account for Sevilla in the Europa League tonight with an incredible free-kick against Qarabag FK.

Hernandez scored the first goal of the match after an hour was played and the La Liga fit have won the game with a comfortable 3-0 scoreline.

United are in action tonight as they host FK Astana at Old Trafford.

Mason Greenwood, who earns his second senior start for the Red Devils, has scored a number of free-kicks for the youth teams. Hopefully he gets a chance tonight around the penalty area.

Chicharito has scored his first goal for Sevilla.

WHAT A FREE KICK! 🔥pic.twitter.com/1hKs5qqarC