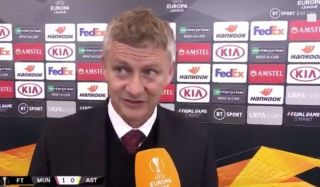 Ole Gunnar Solskjaer can take credit for trusting the young players at Manchester United following tonight’s 1-0 win over FK Astana, but the performance itself will need to be improved on if his side are to win any silverware this season.

Speaking to BT Sport after the match, Solskjaer warned his young players about the expectations that come when playing for the Red Devils.

The Norwegian said: “If you want to play for Man Utd, you have to handle fan expectations.”

Solskjaer’s not wrong. We have high expectations but they’ve had to be lowered in recent years. Tonight’s display was far from entertaining, even though United dominated throughout.

The team Solskjaer put out looked very attack-minded and that it was… but the amount of wasted opportunities in front of goal may put the manager in a position where he needs to change his approach in games, or maybe have a rethink about his coaching of these players.

He was also very complimentary of Greenwood, who he held accountable for winning the game with his goal.

Watch the full interview with Solskjaer on BT Sport below:

“If you want to play for Man Utd, you have to handle fan expectations.”

“Mason won us the game, I’m very pleased for him!”

Ole Gunnar Solskjaer was happy with the young players as his side squeaked past Astana. pic.twitter.com/eYza1UBWIF