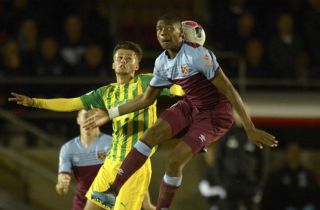 That’s according to West Ham ITK ExWHUemployee, cited by Hammers News, claiming that United have performed more than one scouting missions on the highly-rated centre-back.

The level credibility of behind @ExWHUemployee is unknown, but he appeared on the West Ham Way podcast last night and said the following: “Jamal Baptiste, a 15-year-old, played for the under-23s. He’s a centre-back, meant to be very highly-rated. However, Manchester United sent a scout to watch him, and they’ve sent the same scout to watch him two or three times now. So we need to get him time down as best as possible.”

Boasting over 63k followers on Twitter and claiming to offer exclusive news on all things West Ham, it certainly looks like he’s a trusted source amongst Hammers.

Baptiste’s young age may cause West Ham some problems if the Red Devils come knocking because he’s too young to be tied down to a long-term contract, which means they’re definitely at risk of losing him.

However, United would have to pay some sort of tribunal fee if they were to sign him.

It says a lot about the 15-year-old that he’s already getting into the U23s side.

Baptiste’s role in keeping a clean sheet against West Brom was praised by Hammers under-23 coach Dmitri Halajko.

He said, as per HITC: “To have a 15-year-old ahead of him, Jamal Baptiste, really shows the level of talent that is at the West Ham academy. We’ve got a 15-year-old here that can play Under-23s level football, and help us to get two clean sheets on the bounce.”

Ole Gunnar Solskjaer is looking to fill his squad with talented young players and, in an ideal world, the academy will be feeding the first team. By signing Baptiste United could be looking at a future centre-back and it’s been a while since our academy produced one of those — of the required standard.

The jury is still out on Axel Tuanzebe. The young Englishman is due to start tonight in United’s Europa League opener against FK Astana.