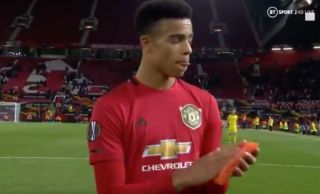 Mason Greenwood is bursting onto the scene for Manchester United and after tonight’s goal against FK Astana, fans will be wondering if the young striker is due a start in the Premier League.

The 17-year-old scored the only goal of the match as United dominated but failed to take advantage of their flurry of chances in front of goal.

Marcus Rashford was incredibly wasteful throughout and needs to start scoring soon before more questions are asked of his finishing. It won’t be long before the Danny Welbeck comparisons start…

Sticking to comparisons, however, former Manchester United midfielder Owen Hargreaves was offering his analysis of the match on BT Sport and claimed Greenwood’s move for the goal reminded him of Robin van Persie.

He said: “It almost reminded me of Van Persie chopping on that left foot!”

The sky is the limit with Greenwood and there’s every chance he could be as good as the Dutchman one day.

Van Persie was a lethal finisher and left rivals Arsenal to win the league for United.

Hopefully Greenwood doesn’t have to wait long before he has a Premier League medal to his name.

Check out Hargreaves analysis below (via BT Sport 2):

“It almost reminded me of @Persie_Official chopping on that left foot!”

A bright future ahead… pic.twitter.com/SNOqDvjQkb