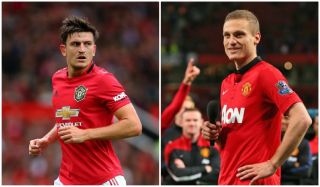 Nemanja Vidic is backing Harry Maguire to shine at Manchester United, but stresses the entire defence still needs to improve.

The former Leicester defender will prove to be a “good signing” for the Red Devils, according to Vidic.

Ole Gunnar Solskjaer attempted to bolster his defence this summer knowing he had no other choice but to try address a problem that’s existed at Old Trafford for years. He did so with a record-breaking £80m signing in Maguire, as reported by The Guardian.

Moreover, new deals have been agreed with David de Gea and Victor Lindelof, so there have been plans put in place to sort the defence this season.

Despite showing signs of improvement at the back, Vidic believes United still look a little shaky when it comes to defending.

Speaking about the impact of Maguire, he said (quotes from Goal): “I think he’s had a pretty good start. Obviously we have big expectations of him, he was a big signing.

“We need the defence to improve, we all know how important the defence is in winning trophies.

“If you want to win trophies, you need to have a strong defence, don’t lose many goals. Obviously he’s still new.

“He just came, he didn’t have a pre-season with the team. I think better games are coming from him and I think he’ll be a good signing.”

So far Maguire, in my opinion, has been a shrewd addition. We needed to bring a leader in and he appears to lead by example.

I wouldn’t go as far as saying he’s indefinitely sured things up at the back but we’re definitely better off with him in defence than without.

United have kept just two clean sheets this season — against Chelsea and Leicester City — and we’ll be hoping for another two this week against FK Astana in the Europa League and West Ham in the Premier League.