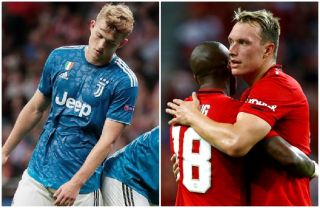 I wouldn’t go as far as saying Manchester United dodged a bullet not signing Matthijs de Ligt this summer because he’s still one of the best defenders in the world at such a young age.

The Dutchman, 20, was Europe’s most wanted defender during the summer and the Red Devils were among those trying to sign him from Ajax.

Juventus were successful in their attempt to secure his signature in a €75m deal, as reported by The Guardian, but criticism has soon followed the Netherlands international because his performance levels aren’t quite what they were last season when Ajax rocked Europe and reached the semi-finals of the Champions League.

His aim this season will be to win the Champions League outright with the Italians.

De Ligt has been savagely mocked on social media for his displays at Juventus, with some Twitter users dubbing him ‘The Dutch Phil Jones’.

The Serie A champions began their Champions League campaign with a draw after squandering a two-goal lead against La Liga outfit Atletico Madrid, and De Ligt was singled out for his performance.

Genuinely makes me sick to my stomach to watch de Ligt on Juventus. Turned him from a fearless, high-pressing, positive defender into a passive one who just sits and waits to clear crosses.

Can imagine he gets so frustrated watching our games.

Check out the tweets below:

De Ligt being exposed as the Dutch Phil Jones once again. Hook it into my bloodstream💉💉 pic.twitter.com/6uausqo6fo

A lot of this is typical of social media. De Ligt needs time to adjust his game to how Juventus defend.

It doesn’t appear as though he’s being asked to come out of defence with the ball at his feet as much as he did with Ajax.

If only he decided to join United instead…