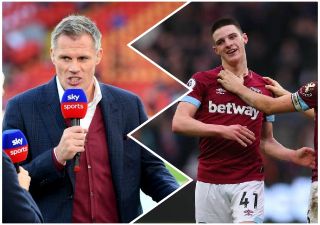 The 20-year-old is rated as one of the best up and coming prospects in the Premier League.

Last season Rice established himself as a key member of Manuel Pellegrini’s team and has since committed to England after controversially changed his allegiance from the Republic of Ireland.

He was linked with a move to Old Trafford in the summer but Ole Gunnar Solskjaer didn’t add a midfielder to his squad in the transfer window. That’s likely to change in January or next summer, with the Red Devils light in that department following the departures of Marouane Fellaini and Ander Herrera.

Moreover, Nemanja Matic is ageing and has been overlooked most weeks with S cott McTominay partnering Paul Pogba instead.

Asked whether United should consider a swoop to sign Rice, former Liverpool defender Carragher said on Sky Sports’ Monday Night Football (quoted by The Metro): “Would I pay £90m for a holding midfield player? No I wouldn’t. But do I think Declan Rice is of the quality where eventually he’s going — whether in 18 or 12 months — to play for a Champions League team, I think he can.

“There’s no doubt he still has to improve, yes he can get better in terms of his angles, receiving the ball off the back four.

“If I was a top four team, and I was in Manchester United’s position and looking for a midfielder, I’d have Declan Rice as that holding midfield player.

“Obviously the price, I wouldn’t pay £90m for him, of course I wouldn’t. But if you’re talking £50m, maybe more, I think he could do a job for a Champions League team.”

Judging on the summer signings Solskjaer made during his first transfer window as United manager, he can be trusted identifying talents for the future.

All three new signings — Daniel James, Aaron Wan-Bissaka and Harry Maguire — have hit the ground running at Old Trafford. The results may not be great but the new boys have hardly put a foot wrong.

United need to be scouting the rest of England and Europe for the ideal midfield partner for Pogba. That is, of course, if he stays beyond next summer with Real Madrid still sniffing around the Frenchman.